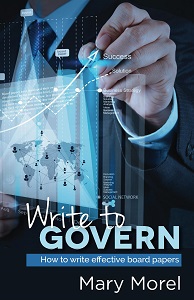 The second edition of my book Write to Govern: How to write effective board papers is now available on my website, Amazon and Kindle.

Governance consultant and non-executive director Julie Garland-McLellan says: ‘I reviewed the first edition of this book and loved it. Now it is back in a much improved new version with thoughtful additions such as an up-to-date focus on electronic papers and the use of board portals.

‘The book is practical, authoritative and (of course) well written. It is a “must read” for senior executives who want to improve their standing with the board and a “must have” for any board that wants to increase its satisfaction with the written reports and papers that plague its meetings.

‘This book will make the lives of directors easier and improve their governance by enabling reporting to add value to decision-making.’

Question: What is the difference between ‘dependent’ and ‘dependant’?

Answer: In Australian and New Zealand spelling, ‘dependant’ is a noun and means someone who depends on support from others. This support often has a financial component.

The child is a dependant.

‘Dependent’ is an adjective and means ‘relying on’.

The outcome is dependent on the test results.

American spelling uses ‘dependent’ for both meanings. Much simpler.

Over the holiday period, I read Eyes before Ease: The unsolved mysteries and secret histories of spelling by Larry Beason. Here are a few examples of how illogical our spellings are:

I discovered that one of the reasons spelling phonetically often doesn’t work is that we have 26 letters and yet more than 40 sounds.

I asked for your pet peeves after complaining about ‘simply’, but reading them all, I started to wonder what I like about modern usage. I like the brevity, bordering sometimes on abruptness, of email communication. What do you like?

Word of the month

The latest print edition of the Collins English Dictionary contains 50,000 new words, including ‘selfie’, ‘felfie’ (selfie of a farmer), ‘bitcoin’ and ‘twerk’ (dance in a sexually provocative manner).

‘Adorkable’ was voted in by Twitter users from a shortlist of emerging words.

‘When I read some of the rules for speaking and writing the English language correctly… I think: Any fool can write a rule. And every fool will mind it.’
Henry David Thoreau, 19th century American author