Initial capital letters are used more sparingly today than in the past, in keeping with the modern trend towards using less punctuation.

the Bank, the Company, the Board.

Although some capitals are still used for respect (e.g. Indigenous), their use has declined.

Some capital usages are fairly universal and others are a question of style. Read my Punctuation Guide to find out more about initial capitals and other punctuation (available as a Kindle book on Amazon).

Question: Do you need an apostrophe with ’15 years experience’?

Answer: Experts do not agree about whether you need apostrophes for expressions of time and quantity.

The apostrophe is now often left out [because] the sense of these phrases tends to be more descriptive than possessive.

When the time reference is in the singular, however, the apostrophe should be retained to help mark the noun as singular:

a day’s journey
the year’s cycle.’

I agree with this statement, but my editor disagrees, stating that the plural should take an apostrophe for consistency (several days’ journey).

When the film Two Weeks Notice was released, Lynne Truss, author of Eats, Shoots & Leaves picketed cinemas to draw attention to the missing apostrophe in the title. What do you think? Email mary@onlinewritingtraining.com.au

Question: Where does the full stop go in sentences with quotation marks? Jack says, ‘I am fat’.

Answer: The full stop goes inside the quotation marks for full quotes, so your sentence should read:

However, if the quote was just part of the sentence, the full stop goes outside the quotation marks in Australian, New Zealand and British English.

When talking about his weight, Jack said ‘I am fat’.

US English does not follow this rule and full stops are always inside the final quotation marks.

When asked what he thought of the new legislation, he said he thought it was ‘unrealistic and unworkable.’ 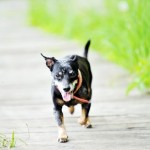 One reader said that ‘loose’ has been in use in English as a noun, an adjective and a verb since the early 16th century. Its meaning has been in the area of closure, loss, laxity, release, indulgence and lack of restraint. With such a stretch, the context becomes very important. ‘Lose’ comes from Middle English and is a bit older than ‘loose’. Present-day use is only in the verb form and its meaning is in the loss, perish, destroy, ruin, misery area.

Present day ‘loose’ and ‘lose’ are not that far apart in meaning – if anything, ‘loose’ is broader in meaning and slightly less negative than ‘lose’. For instance, coppers can loose (release) their dogs onto you, but they would be really upset to lose their dogs. Similarly, objectors to police on horseback used to loose steel ball bearings onto the pavement in front of the horses.

Another reader said there are some overlaps in meaning. A stray dog is referred to as en lös hund in Swedish, i.e. loose dog. In English we refer to loose reasoning as lacking a logical basis. There is also a causal connection – things that are loose often get lost. Another memory jog: Tell yourself not to be a goose or a moose when you use the word loose instead of lose.

Top trending words
According to the Global Language Monitor, emoji, futebol and ghost plane are top-trending words this year. Read more if you don’t know what they mean. (I didn’t know the first two.)

Email is broken – how to fix it
The intro to this BBC article says: ‘Our inboxes contain fundamental flaws that add stress and make us unhappy, but Chris Baraniuk discovers there may be ways to transform email forever.’ Do you think that’s possible? Read the story and tell me what you think – mary@onlinewritingtraining.com.au

Why we need infographics and how to make them great
I hate graphs and charts that are just data dumps so agree with Thomas Porostocky, founder of creative agency TOM, who says: ‘Storytelling is extremely important with data visualization and infographics. If there’s no story, then who cares? It’s just raw data. The story is what will set you apart. If it’s memorable and entertaining, then people will remember it.’ Read the article.

Quote of the month
‘Write. Rewrite. When not writing or rewriting, read. I know of no shortcuts.’
Larry L. King, American playwright, journalist, and novelist